In periods of rapid socio-cultural transformations, like the one we are experiencing, it is necessary to ask ourselves whether and how delicate essential family relationships - such as those between parents and children - could survive without losing their meaning and ultimate purpose; actually, they are basic relationships aimed to the human and spiritual development of anyone.
Today the family structure is less and less based on ethical and spiritual values, consequently parents and children risk being shipwrecked in a kind of "no man's land", where boundaries are uncertain, where feelings, roles and behaviors are often improvised; thus, they will have to pay the price of serious human damages, both at the individual and collective level.
The predominant influence of hedonistic-consumerist culture has progressively diverted the attention of most people from the path to their spiritual development, ascribing in its place pseudo-values, ​​that have profoundly transformed and deformed the concepts of person and family.

Technology has given a powerful impetus to science in many fields, unfortunately without going hand in hand with an ethical model able to solve problems, which the new frontiers of technological development have dramatically and urgently raised; just to name a few: food and energy shortages, incertitude about the use of nuclear power, finance and economics crisis, genetic contamination.
On the contrary, a degenerative ethical behavior is widespread owing to many new and old tensions, that are weakening the authentic religious spirit. All this has contributed to distorting traditional relationships within the family, especially those between husband and wife, between parents and children, to the point of having to rewrite the family law by taking account of all current transformations. Just think, for example, about the army of single mothers: quite a few of them are little more than baby-girls and the abortion rate is increasing. Further, there are millions of victims due to the abuse of drugs, tobacco and alcohol.
Another clear sign of unease is the suffering of children of divorced couple, as well as of those who are suffering the consequence of increase in family violence. Thus, children are the first victims showing more and more personality disorders in a world that seems to have gone mad. By reading carefully these phenomena, we will grasp the underlying lack of ethical and spiritual values ​​and the fact that the “family” has lost its raison d'être: the transcendent aim of existence. Today more than ever, religion seems reduced to a mere formality and God is invoked only to assure a social well-being, that seems to have become the only purpose of life. In such moral quagmire, parents and children, as well as wife and husband, often have selfish interests opposed to the spirit of the family; not rarely they live together for convenience, carrying on a relationship emptied of its sacred meaning and not oriented towards the common good, that should be always superior. As a matter of fact, when one of the spouses has no longer a selfish advantage, he/she quickly becomes apathetic and shows absence of spirit of sacrifice, and they often break the family bonds without hesitation, without remorse. 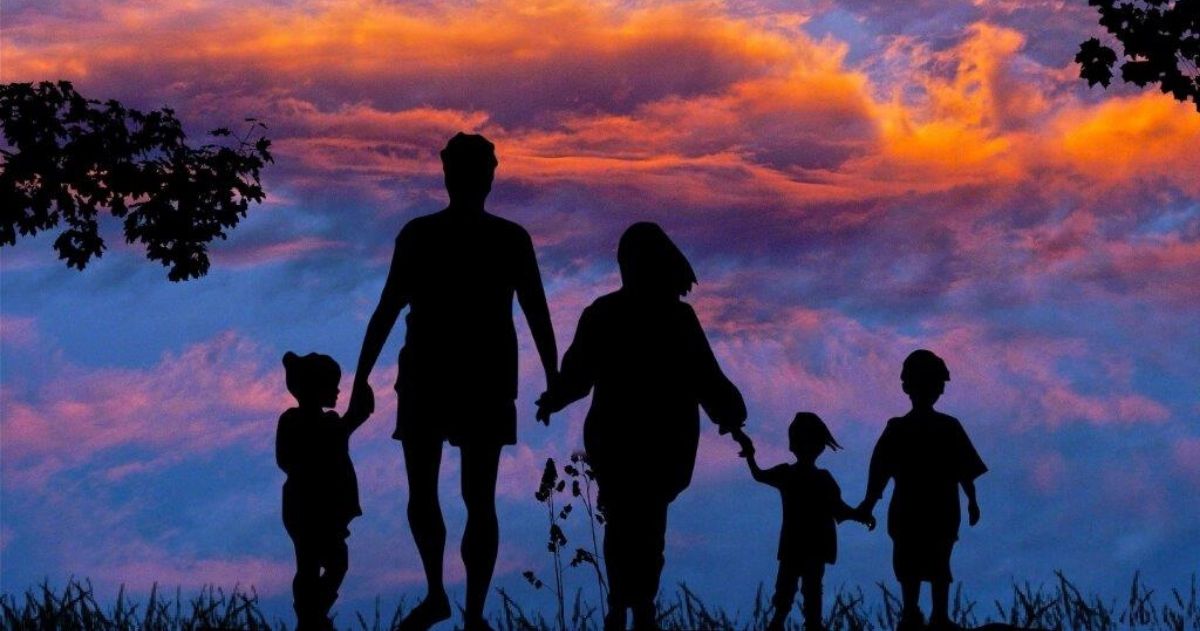 Today many people perceive the family not as a sacred entity, but rather as a limited liability company, they can leave when they want, finding an economic agreement. Uninhibited and irresponsible sexual behaviors and consequent abortions, as well as betrayals and divorces, become common practice and, in a delirium of illusory conquest of freedom, moral degradation is mistaken for emancipation. Both parents work hard to meet ever-increasing pseudo-needs imposed by a consumerist culture, while young people are suffering from lack of education and of reliable examples parents should give. As a matter of fact, children’s education is more and more depersonalized and delegated to outsiders and mass media.
In Indo-Vedic Tradition, the family (griha) represents one of the four stages of the human journey towards liberation from conditioning; it is aimed at offering affection, protection and education to its members. The traditional family was a solid institution, because it was based on solid ethical and spiritual principles. It was made up of grandparents, parents, siblings, uncles and cousins. Responsibilities and roles were well defined and learned since childhood. Furthermore, they learned respect for civil rules, reverence towards their wise elders and love for God. The Creator, creation and all creatures, both human and not human ones, had the sacred right to exist in their earthly and cosmic dimension.
In the family, the role of parents is decisive for the progress of the children. The effectiveness of teaching derives essentially from the power of the example. Only parents who are humanly and spiritually advanced, and at the same time austere, loving, right, generous and loyal with everyone, will be able to inspire similar behavior in their children.
Young people attended the school of the Guru until adulthood during the Indo-Vedic period, where they were educated both on spirituality and family responsibilities. They were not encouraged to marry before having received the recognition of spiritual, social and ethical maturity from their Master, indispensable attainment for entering successfully the family life. It was definitely not recommended to take on the role of parents, if they were unable to facilitate the human and spiritual progress of their children and, through complex liturgies, to favor the post-mortem path of the elderly family members, directing them towards final liberation. In the traditional family, the father is the natural socio-spiritual guide of the family. He teaches by his own example, provides for all needs, protects his family members from the dangers of life, educates the children and helps them in choosing the spiritual master (Diksha Guru), who will give them the initiation and gradually guide towards the rediscovery of their divine and luminous nature, as well their Love Relationship with God.

Women are educated with due care since their childhood, in order to develop the essential virtues to be successful in family life: kindness, hospitality, acceptance, patience, loyalty, loving collaboration with her husband and caring for their home, children and guests. Besides being a generous and loving mother, the bride is an indispensable educator, as well as her husband's most intimate assistant: as such, she is loved and respected as a queen (see Rig-Veda X.85, 20-47) by all family members. The husband, in turn, is educated to treat his wife with affection and respect and to provide for her needs, according to his own possibilities; above all, he is educated to help her in her spiritual growth through his own model of behavior. In the Vedas, the wife is described as the best half of her husband's body and she knows that she cannot achieve liberation (moksha) without having fulfilled her duties toward him and the family.

The husband, in turn, is aware that he cannot free himself unless he has humanly and spiritually educated his family and cared for all members, depending on him. Work, prayers, food, relationships, marriages, rites related to births and deaths, all family life is seen as a series of activities aimed at the purification and development of spiritual awareness, up to the maturation of the pure feeling of love and devotion to God (bhakti-yoga). In this traditional context, the home becomes like a temple and the family a community pervaded by spirituality: it is a monument to devotion in which one rejoices in living by serving and worshiping the Lord; a pure, simple and holy existence is spent there. The education of children, fostering their growth and transformation into adults able to successfully set up their lives, becomes the main purpose of parents. Nothing is therefore left to chance: the birth and growth of children is regulated by religious rites (samskara), aimed at consecrating the various stages along the path of our existence. In Sanskrit "son" is called putra, which means “he who saves from the consequences of sin” (literally translated: “from hell”, called “pu”). The parent who invests his/her energies in the spiritual education of his/her children, earns merits equal to the sum of those obtained by whom has made every kind of sacrifice (yajna), asceticism (tapas), pilgrimage (dhama, tirtha), donation (dhana) and study of the Vedas (svadhyaya).

Canakya Pandita - a great sage who lived in India about 2,300 years ago - in his famous ethical-behavioral treatise (Niti-shastra), teaches that children must always be treated gently until the age of five, educated with care and firmness up to fifteen and then treated as friends for the rest of life. Harshly reproaching boys and girls over age fifteen, if they have not yet received adequate education and developed enough awareness of their own responsibilities, esteem and affection for their parents, means taking the risk of turning them into enemies. The wise Canakya says that having children who become neither devotees of God, nor students of the sacred science, is like having eyes that do not see, useless accessories that may cause only pain. Today’s social conditions have deteriorated so much, that many people are afraid of founding a family. They do not have trust and they fear to encounter an inauspicious future; they are afraid of betrayals, embezzlements, blackmail and lawsuits from family members, in short they fear of living in torment.

However, although taking into account the enormous, objective difficulties, which people about to enter family life are facing today more than yesterday, those who are not yet ready to give up their desire to become husband or wife, father or mother, know that from a social point of view, a constructive alternative to the family has never been available; all improvisations in this sense have always proved to be painful failures. If the concept of family, as it appears today, does not seem reliable, if husband and wife suffer from lack of mutual trust, if parents and children look at each other with suspicion, what can be done? As humans we suffer from many limitations, but we should not forget our divine matrix; therefore we’d better implore the help of the Lord and follow the path of spiritual progress – which others already experienced - for the deconstruction of unconscious conditionings, the harmonization of the personality, the elevation of consciousness - which allows a better relationship with oneself and with others -, the perception and visualization of higher levels of reality. Thanks to a vivified consciousness, it becomes possible to organize both family and social life without phobic anxiety, gradually structuring one's human habits and relationships on the model and universal values ​​indicated by the wise men of all times.